Everyone deserves to live their fullest lives in safe, thriving communities.

We believe all people should have access to quality, affordable health care. Barriers to access are not the same for everyone. Women of color, immigrants and LGBTQ+ people — especially those whose identities intersect — are disproportionately impacted by structural barriers, discriminatory policies and culturally unresponsive care that limit access. For many, birth control and abortion are out of reach because of their income, where they live or because their boss objects to it.

This often leads to worse health outcomes overall. Due to lack of access to quality health care and structural racism, people of color continue to face health disparities. Maternal mortality is three times higher for Black women than white women. The death rate due to breast cancer is 40% higher. LGBTQ+ people face lower rates of health insurance coverage and higher rates of HIV/AIDS and cancer.

Oregonians must have the power, resources, social support, healthy communities and safe environments they need to thrive and to parent or choose not to parent. We seek to understand and address how gender identity, race, nationality, socioeconomic class and other aspects of our identities are used to shape the inequities, oppressions and privileges that people experience.

Planned Parenthood Advocates of Oregon stands with our reproductive justice partners who have long proclaimed that the fight for justice and equity doesn’t end with sexual and reproductive rights. That’s why we advocate for policies that address systemic and economic barriers to care, such as economic security, criminal justice reform, immigration reform, housing security and voting rights.

We work in solidarity across movements to raise the minimum wage, divest from carceral systems and bolster immigrant rights. Instead of investing in systems that brutalize Black and Brown communities, we demand that elected officials prioritize public health approaches that strengthen these communities. Together we fight for all.

We also seek to strengthen insurance coverage for all, including Medicaid and the Affordable Care Act. Cuts to Medicaid significantly impact Planned Parenthood patients, nearly half of whom get their health care through Medicaid.

We push to protect and increase Medicaid funding in Oregon and make ourselves heard in Congress, where Medicaid is under near-constant attack by right-wing politicians.

Check out our 2021 legislative priorities and see how you can make a difference. 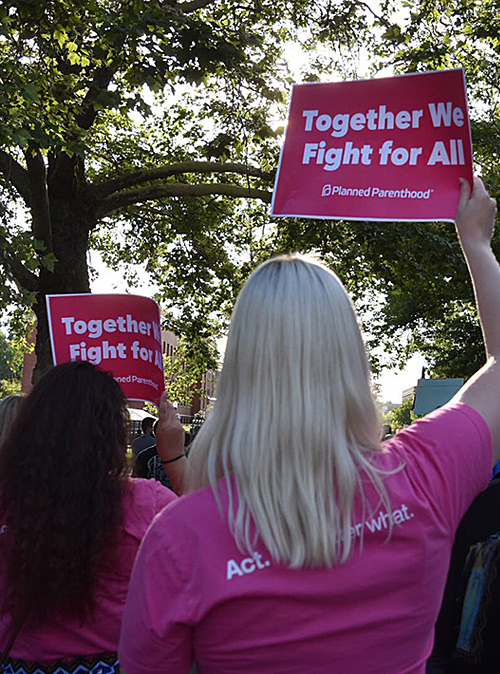 The high stakes of Medicaid funding

Your support is critical. Help us create a more equitable health care system in Oregon with a one-time or monthly gift.